IS Urbanization The Information System designed as a city

IS urbanization, what is it?

Urbanism defines rules and a coherent, stable, modular, in which different stakeholders refer to any investment decision concerning the management Information System.

The term -target- defines the application that is sought to be. It opposes to the existing situation, theAs is. The method to switch from the current as-is to the to-be you want is called the roadmap (or roadmap).

The notion of Consistency High / Low coupling indicates that two applications must communicate with each other in a simple and effective, but that the dependency between these two applications is minimal (ideally none). This allows to remove a block to replace it without disturbing the rest of SI.

The Information System can be compared to a city neighborhood, if it is well built and very urbanized, it is possible to demolish a building in the heart without jeopardizing the entire area and replace or build another building, connecting the new building with different exchange networks: access roads, electricity, sewage, etc.. Urbanization is thus to create an agile, flexible and scalable IS.

The process of urbanization is based on three key areas that feed each other:

The process of urbanization of the IS includes: 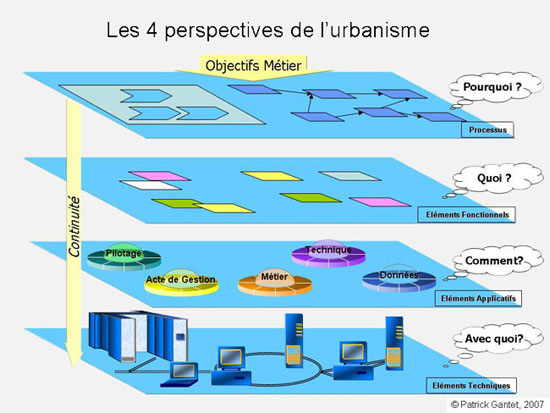